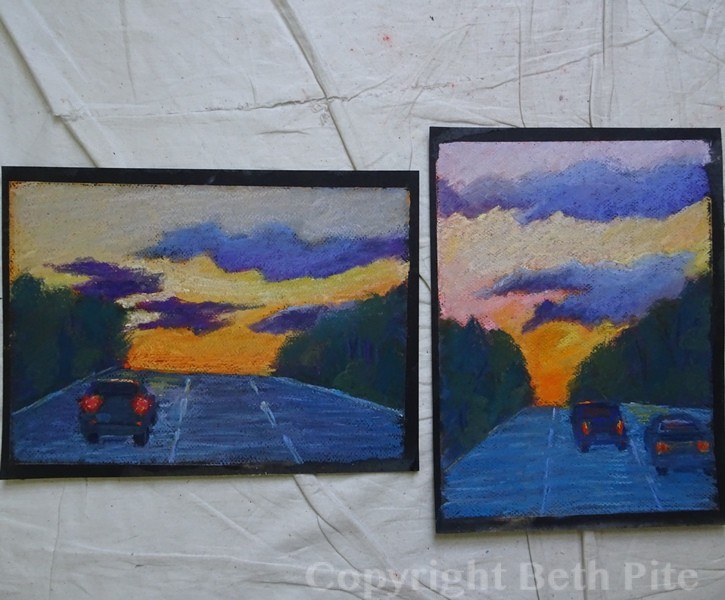 The fraternal twins are finally ready to face the world! A few months back I began a series of two paintings (yes, with my boredom threshold, two constitutes a series) of sunsets, a favorite subject. A shoulder injury, a trip to Portugal and an art opening (you can see my travel paintings in the gallery at UConn’s library in Storrs) intervened, but the two are finally finished. I often paint the setting sun reflected in water, so this time I decided to branch out and challenge myself in three ways.

The first challenge was no water, since I love to paint sunset colors reflected in the sea. Interesting elements in the rest of the painting therefore had to come from something other than water. In this case, the highway scenes offered vehicles in the foreground to balance the colors in the sky.

Those vehicles were the second challenge. I wanted to make them interesting enough to balance the action up top and make it clear what they were, without getting into too much detail. I wanted their tail lights to echo the colors in the sunset enough to move your eyes around the painting, but not compete with the sky. Tempting as it was, vehicle details would be distracting, and the sunset was the main point.

The third challenge was working on two similar paintings at once. I have two easels in my studio (did I mention my low boredom threshold?! LOL) and had one painting on each. This in itself isn’t unusual, but they aren’t usually similar subjects. The challenge was to make them look like fraternal twins, related but certainly not identical. As you can see here, I think it was a success.