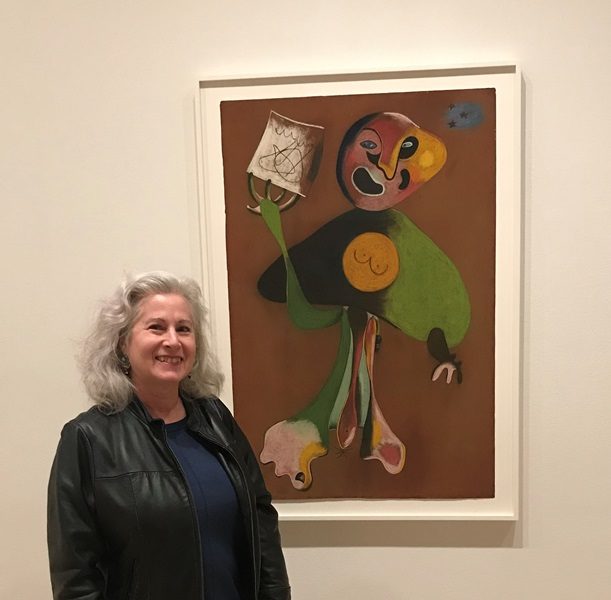 Usually a trip to another country is required to refill my creative well, inspiring me to capture the energy and scenery of a new place that I can share in paintings. Sometimes, though, inspiration is closer to home, in sunsets over the water near my studio. And once in a while I need reminding about artists who inspire me, Miro being one of my favorites.

That’s why I was thrilled to discover this Miro pastel painting at the Museum of Modern Art in New York last month. My first clue something wonderful was afoot? No line to get in, which is something I literally haven’t seen there in years. Second, the exhibit wasn’t so crowded that I couldn’t get close to the paintings to study them. Third, Miro worked in many media, so I rarely get to see his few pastels exhibited.

Spanish/Catalan artist Miro was associated with the Surrealists. Thus he normally employed lines and symbols, not realism. However, Woman (The Opera Singer), is from a series he did during the Spanish civil war, when Hitler and Mussolini first came to power. His way of protesting Fascism was to make paintings more “based on reality” than his usual, showing 3D volume by using shading and layering, not just lines. Fear of violence drove him to make his colorful biomorphic forms even more distorted than usual, showing reality as he perceived it – ordinary people morphing into terrifying monsters.

Like Miro, my work “resembles reality, but is outside it.” I try to show reality the way I perceive it – colorful and energized. If I had to pick a label, it would be Expressive. And perhaps slightly Fauvist, for my use of vibrant colors. It was Miro’s use of color that inspired me when I initially encountered “the Catalan Fauvist” in an art history class. The first piece of real art I ever bought was a Miro. That limited edition print – all I could afford, on credit, as a grad student – is still with me today.